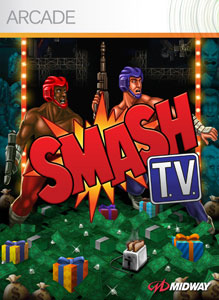 “The future of reality TV is Smash TV! It’s the game show that asks: “How far would you go for a brand-new toaster?” You could win a VCR … or you might lose your life! This new version of the original arcade game features online multiplayer co-op and versus modes.

Listen to the audience cheer as you risk life and limb in room after carnage-filled room. Can you make it to the legendary Pleasure Dome? Cash and fabulous prizes could be yours—but only if you survive. And with the likes of Mr. Shrapnel, Mutoid Man, and Scarface out to get you, it’s not likely. Good luck … you’re going to need it!“