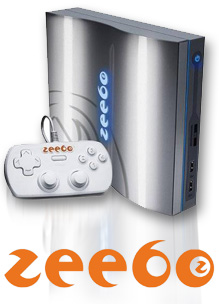 Zeebo Inc. announced in May of 2011 that due to a strategic realignment of their business the Zeebo console, a digital-only set-top box targeted at emerging markets like South America and Mexico,  would be discontinued later that year. The company’s efforts to support the platform and the development of new titles through Zeebo Interactive Studios would also come to a close. The 3G service known as ZeeboNet would remain active until September 30th, 2011 at which point the online store would be closed and content would no longer be available.

Due to the strategic realignment of Zeebo Inc.’s businesses, the operations of Zeebo Brasil and Zeebo Interactive Studios will be discontinued in the country.

Zeebo is grateful for the great support of Brazilian consumers for the system, content and services offered since the product’s launch. The call center and warranty and maintenance services will be maintained as determined by Brazilian law. The online store will be open until September 30, 2011. From now until that date, special prices will be in place to offer Zeebo owners the opportunity to purchase new titles for their system at reduced prices.Content purchased by Zeebo users will remain active and available on the system for use at any time.

Along with educational apps and curated web links, the Zeebo offered nearly 60 games from publishers like Activision, Capcom, Digital Chocolate, Disney Interactive Studios, Electronic Arts, Gamevil, Glu, id Software, Namco, Popcap, and many more. These releases were often adapted from other mobile versions (Android and iOS) or handheld consoles but several were exclusive to the Zeebo. As a digital-only console whose games were exclusively distributed via the ZeeboNet service, all of the content for the Zeebo is considered extinct. Only content that had been downloaded to the Zeebo’s 1 gigabyte internal storage or moved onto an SD Card before September 30th, 2011 remains accessible today.

Below is Zeebo Inc’s description of the platform, its features, and a list from Wikipedia of all games for the platform. We have also created a playlist of several videos showing off Zeebo’s games, the user interface, and its apps including social media, chat, and web browsing functionality. Individual pages for Zeebo titles will not be added to the site at this time.

From zeeboinc.com: The Zeebo is the world’s first 3G-enabled interactive entertainment and education system, designed expressly for families in emerging global markets. Leveraging broadband wireless networks and increasingly powerful mobile device technology, the Zeebo opens a new world of learning, fun and connection. Families can download and run educational applications, go online and visit websites, purchase and play games and other content, send email and join social networks, all from home with unprecedented ease and convenience.

The Zeebo system delivers the ultimate in simplicity and ease of operation. Everything just works. Plug it in, hook it up to a TV set and begin. The Zeebo automatically connects to the ZeeboNet Wireless Network, with no subscription or contract needed. The user interface is self-explanatory. Adults and kids of all ages can jump in and start using it right out of the box.

The Zeebo takes advantage of 3G wireless networks, which are spreading rapidly worldwide even in areas where wired broadband is scarce or unavailable. Users who were “off the grid,” can now reap all the benefits of connectivity. They can download content and applications, visit websites, send email and access social media, any time they like.

In an increasingly conservation-conscious world, the Zeebo is a big energy saver. It consumes roughly 1.5 watts when active—many times lower than computers and other electronic systems.