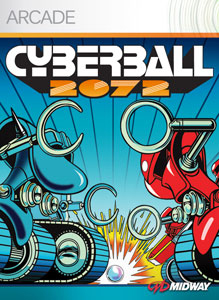 “Rediscover the arcade classic game Cyberball 2072 on Xbox Live Arcade. Take control of your robotic team, and call the plays to move your downfield for a touchdown. But watch out. The ball gets hot if you don’t keep moving. Keep your eye on the ball to make sure it doesn’t go critical before you can score. Call more than 100 plays for your robotic team.

The Beat the Coach mode enables you to go up against the A.I., simulating a live opponent. The special Challenge Mode tests your ability to make the play under pressure. Build up your win record, and buy upgraded robots to improve your roster. Fast football action with robots. The ball gets hotter with each play and can only be reset by moving past the 50-yard line or scoring a touchdown.“