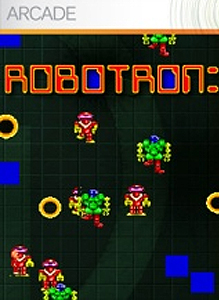 “In 2084, man creates a species of super-advanced cyborgs known as Robotrons. Recognizing the imperfect nature of their creators, the Robotrons conclude that the inefficient human race must be exterminated.

In Robotron: 2084, only you and a single family of clones remain. If mankind is to survive, you must destroy the Grunts, Brains, Enforcers, and Tanks—but avoid the indestructible Hulks at all cost. Can you withstand wave after wave of android invasion and rescue Mommy, Daddy, and Mikey … before it’s too late?“