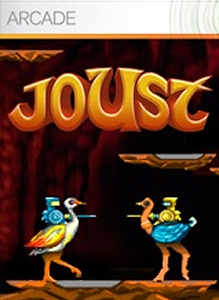 On August 25th, 2016 Xbox’s Major Nelson tweeted simply that “Joust is coming to Xbox One Backward Compatibility today”. Details are still being researched but as of the same date no other delisted Midway titles have been relisted nor has Joust reappeared on PlayStation 3.

“Mount thy noble ostrich and ride forth into battle in the classic arcade game Joust™! If you choose to venture with a friend, your companion shall ride a proud stork. Together, defeat three types of enemy knights: red Bounders, silver Hunters, and dark blue Shadow Lords. As these villains fly through the caves atop swift-winged buzzards, strike them from above with your trusty lance.

Capture the resulting eggs before they hatch or even stronger foes will emerge. Watch for the pterodactyls that infest these caverns—if your quest takes too long, they will attack. And as the lava pit rises higher and higher, flap mightily to stay aloft … far from the grasp of the troll that would drag you down to the fiery depths.“