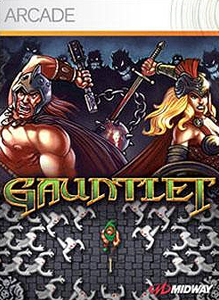 “Gauntlet® is back! The original role-playing arcade game lets four adventurers explore together as a warrior, valkyrie, wizard, and elf. Traverse the darkest of mazes, destroying vile beasts and claiming gold. Consume food to regain your strength, collect keys to journey deeper, and seek out potions to defeat your most powerful foes.“