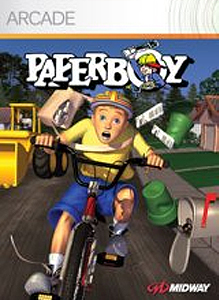 “Can you deliver? Rediscover the classic arcade game Paperboy on Xbox LIVE® Arcade. Keep your subscribers happy by tossing newspapers on their doorsteps with perfect accuracy. Pedal fast and avoid obstacles to make the headlines and bring home the bacon.“