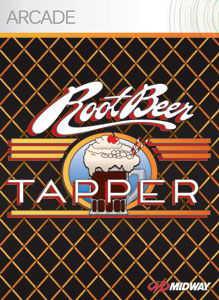 “Get ready to serve! Rediscover the classic arcade game Root Beer Tapper on Xbox LIVE®. Take on a room full of thirsty folks and keep their mugs full as they belly up to the bar, but don’t drop the empties if you want to win.“

It’s not the highest quality recording but it features the original Xbox 360 “blades” dashboard which itself is delisted.