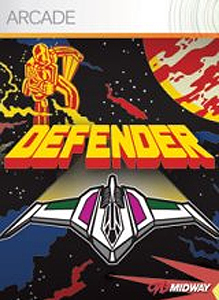 “The classic space shooter is back! Now for the first time you can play Defender on Xbox Live. Protect the humans on the planet surface by destroying the invading alien abductors.

In the future, the galaxy is invaded by hostile alien forces. Attacking in countless swarms, the aliens decimate any planet they encounter. Those who survive the initial invasions are harvested and forced serve the alien invaders. Mankind’s only hope lies in you, the Defender!“