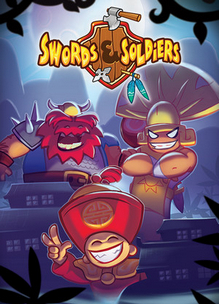 Swords & Soldiers’ availability on PlayStation 3 was first brought into question on December 28th, 2014. In detailing the differences between the multiple versions of the game, NeoGAF user, Hero of Legend, posited that the PlayStation 3 release had been delisted. They also linked to the free demo available on the game’s PlayStation Store page but it has since been removed.

If the game was delisted in late 2014 it puts it very close to the sale of Sony Online Entertainment which was announced in February of 2015. After the announcement several titles were quickly delisted and it is possible many others were shut down in the preceding year as the terms of the sale were being finalized.

At the latest, the Nintendo Wii version of the game would have been delisted in January of 2019 when Nintendo shut down the Nintendo Wii Shop channel. While still available on many platforms, the PlayStation 3 edition was the only one to support 3D televisions and offer display modes for anaglyph 3D glasses.

“Blend ninja monkeys, attacking Aztecs and brutal Vikings with everything you love about real time strategy games and you’ve got Swords and Soldiers, a unique new game hitting the PlayStation®Network! Acquire resources, assemble your army, thwart enemies and dominate your opponents in single and multiplayer local and online modes. Choose from the Aztec, Viking and Chinese factions, each with their own missions, campaigns and abilities. Advance through each level and unlock special modes, minigames and PSN trophies as you go!“

* 3D Requires a 3D enabled television in combination with appropriate (shutter)glasses.  For normal TV’s, the game also supports the following combinations of colored glasses: “Green/Magenta“, ” Red/Green“, “Red/Cyan” and “Red/Blue“. It is also possible to swap left and right colours for each combination.