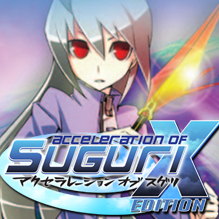 Acceleration of SUGURI X-Edition on PlayStation 3 was delisted no later than August 8th, 2015 in the US and is one of many delisted titles from the studio formerly known as Sony Online Entertainment. The game was available on the European PlayStation Store but was delisted between August 2016 and July 2017. The game was also available through Desura but the service was purchased in October of 2016 and is currently offline.

“Acceleration of SUGURI X-Edition, the ultimate in anime-style, robot fighting-action is here! Leap into beautifully rendered battle environments, wield innovative, pulse pounding weaponry and survive 11 levels of captivating doujin gameplay. Make sure to crank up the volume so you can enjoy the high-energy techno-trance soundtrack. Take on the CPU or battle it out with a friend. With three different Arcade modes and three different Versus modes to go along with local and online leaderboards, gameplay replay videos and 14 PSN trophies up for grabs, you don’t want to miss the rush that is, Acceleration of Suguri X Edition!“