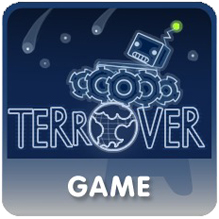 Very little online discussion exists about TerRover’s delisting. It was last confirmed available in November of 2012 when it and other Sony Online Entertainment titles were on sale in North America. The first confirmation of its delisting comes from me in late 2014 when I was only able to re-download the demo from my purchase history.

If the game was delisted in late 2014 it puts it very close to the sale of Sony Online Entertainment which was announced in February of 2015. After the announcement several titles were quickly delisted and it is possible many others were shut down in the preceding year as the terms of the sale were being finalized.

While members of the Creat team talked up TerRover on social media and the official PlayStation blog it’s interesting to note that the game was never featured on their own site. Archive.org captures turn up no TerRover page, only a link to the PlayStation blog and a few lingering images in a directory.

As of July 2016 TerRover remains available to purchase from the Hong Kong PlayStation Store.

“Launch yourself into the surreal mash-up of unique cartoon graphics and 2-D physics universe that is TerRover, now available on the PlayStation®Network! Navigate through over forty stages of puzzling arcade levels in five different vivid art styles including the icy vistas of Congelata, all-tech surfaces of Mechanica, strange vegetation and terrains of Acor and Aura, and the treacherous volcanoes and lava of Volcanus! Use your wheel’s rotation, pivot center, and various weapons to overcome challenging obstacles and barriers. TerRover features three local multiplayer modes for up to four people, leaderboards and PSN trophies.”