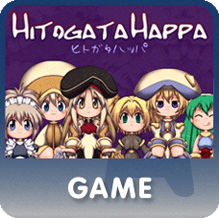 Hitogata Happa was delisted no later than October 27th, 2015 and is one of many delisted titles from the studio formerly known as Sony Online Entertainment. It was part of the Gundemonium Collection that included Gundemonium Recollection, GundeadliGne and Hitogata Happa.

The game was not delisted from Steam until July 31st, 2019 at the request of developer Platine Dispositif. Rockin’ Android posted the following message on July 12th to the game’s Steam forum page:

“Greetings Androids! We have a bit of sad news today, the following Rockin’ Android games will be retired from Steam store on July 31st, 2019; Bunny Must Die!, Gundemonium Recollection, GundeadGline and Hitogata Happa. We are sorry for the inconvenience, the original developer Platine Dispositif has decided to retire the games; with the intention to update and publish them on Steam at a later date. Please contact them directly for more details. Also the retired games will no longer be updated.

The decision to retire the games was not ours, but we respect their decision and we thank Platine Dispositif for granting us permission to publish their games and to add our own spin, such as the popular remix soundtracks. It has been an absolute blast working on these games and we’re extremely grateful to the fans, programmers, translators and specially Platine Dispositif for all their wonderful support! Thank you all!!”


The Dawning of Daybreak
It was confirmed on February 2nd, 2015 that Sony had sold its internal development studio, Sony Online Entertainment, to the investment firm Columbus Nova. The studio was renamed Daybreak Game Company and their focus shifted entirely to multiplayer online games.

Gundemonium Collection was a bundle of three Japanese shooters localized for North American, European and Australian release through a collaboration with Rockin’ Android and Sony Online Entertainment. The bundle of all three titles sold for $14.99. Each title was available individually for $5.99.

“Shoot first, shoot fast, shoot precisely and above all else, shoot the hell out of all your enemies in GUNDEMONIUM COLLECTION, the epic trilogy that brings together three of indie game developer Platine Dispositif’s most revered and sought-after “bullet hell shooter” titles from Japan.

Prime yourself for wave after wave of frag-filled action and close-quarters firefights on an ever-changing battlefield by evading a lightning-fast hailstorm of bullets, lasers, shrapnel and bombs, while unleashing some of your own in Gundemonium Recollection, GundeadliGne, and Hitogata Happa. Anything less than that and you’ll be toast before completing your first level!

The first game in the Gundemonium trilogy, and tells a story of alchemy gone wrong in an alternate 18th century. Its galvanized and finely tuned side-scrolling bullet-hell shoot-’em-up gameplay sets it well above most other games in the genre. The game is deceptively simple from the outset, but has very well-thought-out gameplay mechanics. There are multiple playable characters, expertly crafted enemies and bullet patterns, a variable-difficulty “Phase Level” system, a risk-and-reward bullet “Friction” system, a “Demonic Shift” ability that’s not for the faint of heart, and much more.

Blast through Gundemonium Recollection, which is assaulting the PlayStation®Network in its global debut! This 2-D anime-style game brings the intense indie ‘bullet hell’ genre to your PlayStation®3 computer entertainment system. Choose one of three playable characters or an unlockable fourth! Dominate 5 levels of frenetic gameplay while you’re being bombarded with bullets, laser beams, fireballs, bombs and other high-impact weaponry. Each level culminates with a challenging boss to defeat; maneuver your way through random enemy attacks and think quickly to strategize on the fly. The Story, Practice and Mission modes keep the non-stop action going!“