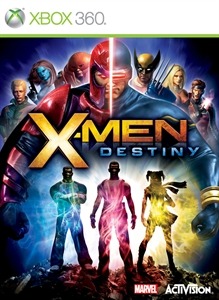 The Xbox 360 Games on Demand version of X-Men Destiny was confirmed delisted on January 1, 2014.

“Play as one of three new characters in X-Men lore, each one of whom must come to terms with their unique background and powerful mutant identity while uncovering the truth behind an epic event that threatens to tear apart the tenuous peace between humanity and mutant kind. Fight alongside and against famous mutants from the X-Men comics, including Wolverine, Cyclops, Emma Frost and more. Will you choose to follow the teachings of the X-Men to unite mutants and humans, or will you usher in a new age of mutant domination with Magneto’s Brotherhood? YOU decide.

In the action-RPG X-Men Destiny, you control the fate of a new mutant in the X-Men universe. Every choice has a consequence, as your destiny is determined through the decisions you make.”
– Nintendo.com description