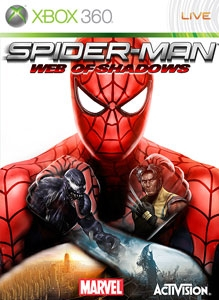 The Xbox 360 Games on Demand version of Spider-Man: Web of Shadows was confirmed delisted on January 1, 2014.

“With a story penned by acclaimed Marvel comic book writer, Brian Reed, the title features a New York City devastated by a deadly symbiote invasion, in which players are faced with the choice to play the heroic web-slinger in his classic, agile red suit or the dark, formidable black suit. Battling with or against a huge cast of fan-favorite Marvel Super Heroes and Super Villains, gamers can switch allegiances instantly as they decide which missions will ultimately save mankind.

An all-new combat system, built from the ground up, combining web-slinging and customizable superpowers provides gamers the unrivaled opportunity to fight and explore in an open free-roaming and destructible environment. In battle, Spider-Man’s speed and agility are tested within the diverse cityscape, challenging players to master fast-moving acrobatic combat, powerful new web-slinging moves and destructive combo attacks, as combat seamlessly migrates from the streets, up the sides of buildings and onto rooftops.”
– Activision press release