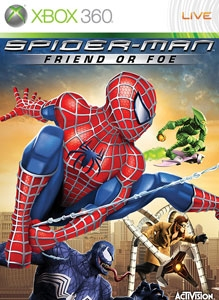 The Xbox 360 Games on Demand version of Spider-Man: Friend or Foe was confirmed delisted on January 1, 2014.

“As the Spider-Man: Friend or Foe experience unravels, Spider-Man and his sidekicks unlock a variety of arenas and secret areas containing special tokens which allow players to revisit previously explored levels at any time as well as fortify their cache of collectables and power upgrades. Gamers can also replay levels as Spider-Man’s darker, more mysterious persona, Black-Suited Spider-Man, and experience a robust Versus mode, with multiple arenas, where players match up any two characters and battle it out to see who wins.

Spider-Man: Friend or Foe is available now for the Xbox 360(TM) video game and entertainment system from Microsoft and the Wii(TM) home video game system from Nintendo for a suggested retail price of $49.99, the PlayStation(R)2 computer entertainment system and PSP(R) (PlayStation(R) Portable) system for $39.99, the Nintendo DS(TM) for $29.99 and the PC for $19.99. The game is rated “E10+” (Everyone 10 and older – Cartoon Violence) by the ESRB.”
– Activision press release