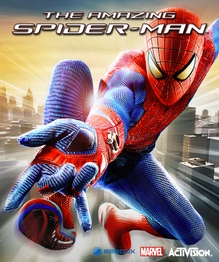 “Go beyond Sony Picture Entertainment’s Colombia Pictures feature film and find out what happens next in The Amazing Spider-ManTMvideo game, which brings Spider-Man’s free-roaming, web-slinging action back to New York City.  Players take on the role of a young Peter Parker discovering his new Spider-Man powers and added Super Hero responsibilities, using the game’s innovative Web Rush mechanic to swing freely around Manhattan, combat a variety of criminal activities and take on classic Marvel Super Villains.  Set against an original story crafted by Hollywood writer Seamus Kevin Fahey (Spartacus: Gods of the Arena, Battlestar Galactica) that takes place entirely after the events of the upcoming feature film, The Amazing Spider-Man video game delivers a brand-new, immersive and cinematic adventure allowing players to truly harness the power of your friendly neighborhood Spider-Man.“