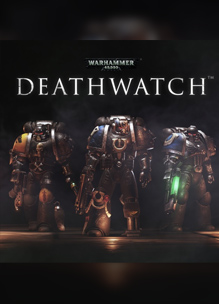 Warhammer 40,000: Deathwatch was delisted on Steam on July 26th, 2021. The PlayStation 4 version was likely delisted around this same time. As with most other Warhammer titles, the delisting is likely due to expired licensing of the Warhammer property from Games Workshop.

Command the ultimate team of elite Space Marines. Warhammer 40,000: Deathwatch is a turn-based strategy game, set on the edge of Imperial space, where your Space Marines will take on the Tyranids in a series of tactical engagements. From war ravaged cities, to the insides of Tyranid bio-ships, the missions will see your Kill Team rise in strength and skill as you face ever greater threats and peril. ENHANCED EDITION: The Enhanced Edition of Deathwatch is a remastered and upgraded release specifically for PC players.

LEVEL UP: Gain experience points on missions and spend them on your Space Marines to unlock powerful skills and abilities.