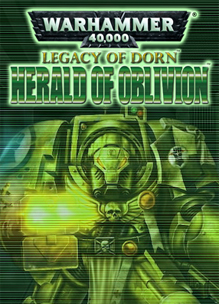 Tin Man Games announced on June 15th, 2020 that their “digital gamebook” Legacy of Dorn: Herald of Oblivion would be removed from sale “soon”. The game was on sale for $1.00 through June 29th and was then featured in a Warhammer franchise Humble Bundle through the end of July. The game was ultimately delisted on August 2nd, 2020. Tin Man Games’ announcement follows:

“It is with a heavy heart that we must announce the removal of Legacy of Dorn: Herald of Oblivion from Steam. This is due to our license not being renewed.

We first released the digital gamebook over five years ago (where did that time go!?) and it’s been an absolute honour for Tin Man Games to play around in the Warhammer 40,000 universe. We would like to thank Games Workshop for giving us the opportunity to adapt the original paperback gamebook, and would like to thank writer, Jonathan Green, for crafting the original exhilarating adventure!

While it’s sad to say goodbye to the Space Marines of the Imperial Fists Chapter, our journey with them enabled us to open many more doors. These lead to The Warlock of Firetop Mountain, Table of Tales: The Crooked Crown (our tabletop RPG VR game) and more recently our collaboration with Steel Sky Productions on Warhammer Underworlds: Online.

If you don’t own Herald of Oblivion, now is your final chance to grab it. Once gone, it’s not coming back!! For Dorn and the Emperor!”

“A vast choice-based digital gamebook set within the Warhammer 40,000 universe where you are a Space Marine!

You are a veteran Space Marine of the Imperial Fists Chapter. Equipped with powerful Terminator armour and armed with the deadliest weapons that the Adeptus Astartes wield, you are a symbol of the Emperor’s might. Trapped aboard the space hulk Herald of Oblivion and the only survivor of your squad, you must fight your way through the aliens and heretics that infest the star vessel and find a way to escape the horror and return to your Chapter.

Herald of Oblivion is adapted from the gamebook written by Jonathan Green and was originally published by Black Library/Games Workshop.“

Thanks to MrFortyFive for submitting this game to the site