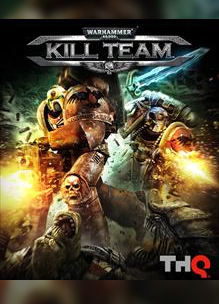 Warhammer 40,000: Kill Team was delisted on Steam on December 7th, 2020. It was delisted on Xbox 360 worldwide between December 10th and 14th. As of this writing the game remains available exclusively on PlayStation 3. It can be found on the PlayStation Store website in Australia and Europe but on the console itself it can allegedly only be purchased by first downloading the demo of the game. The North American release is readily available from the PlayStation Store. However, it is assumed that the PlayStation 3 version will also be delisted soon. The cause for the delisting is most likely related to expired Warhammer licensing from Games Workshop.

Jump into the rich world of Warhammer® 40,000® in this fast paced 3rd person action shooter. As one of the Emperor’s Elite Space Marines you have been sent on a vital mission to assault a gigantic Ork Kroozer headed for an Imperial Forge World. Choose your Space Marine Chapter and weapons class and commence the purging of brutal Orks and vicious Tyranids on board. Team up to form a 2-man Kill Team™ in same screen co-op mode and benefit from multiple team pickups to help survive the onslaught. Reap the rewards on completing your missions by unlocking an exclusive Power Sword weapon to use in Warhammer® 40,000®: Space Marine!