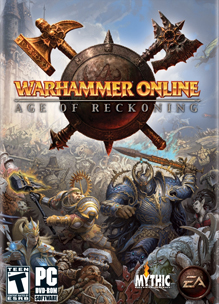 We here at Mythic have built an amazing relationship working with Games Workshop creating and running Warhammer Online: Age of Reckoning over the last 8 years. Unfortunately, as with all licensing deals they do eventually  come to end and on December 18th, 2013 we will no longer be operating Warhammer Online. As such we will no longer be selling 3 month game time codes or have the ability to auto renew your accounts for 3 months as of September 18th, 2013. If you would like to read some additional thoughts from one of WAR’s Producer please check out http://www.warhammeronline.com/.  From all of us here at Mythic we thank you again for your dedication and support over the last five years.

After the game’s closure on December 18th, 2013 various individuals and groups sought to create private server versions of the game. In 2014 War-Emu launched Return of Reckoning which is still running as of May 2021.

Experience the glory of Realm vs. Realm! Declare your allegiance and join hundreds of thousands of mighty heroes on the battlefields of Warhammer Online: Age of Reckoning to experience the epic nature of war. Enter a grim fantasy world where the armies of Order (Dwarfs, High Elves, and Empire) and Destruction (Greenskins, Dark Elves, and Chaos) collide to determine the fate of nations. Invade enemy lands, besiege imposing fortresses, and sack sprawling capital cities for the glory of your Realm. Wield devastating magic and deadly weapons, battle monstrous creatures, and join your brothers-in-arms in epic Public Quests™. Climb the Bastion Stair, carry your Guild Banner into battle, and unlock the secrets of the Tome of Knowledge as you travel the world. Sharpen your blade and prepare to unleash your inner mutation—the Age of Reckoning has begun and WAR IS EVERYWHERE!

Thanks to Alexander Watters for submitting this game to the site