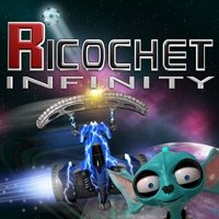 Ricochet Infinity was delisted from Reflexive’s own PC storefront in June of 2010, from Steam on November 26th, 2014, and from Amazon’s digital game store in 2016 (PC edition only). While this title is still available from numerous online game portals, in December of 2017 Reflexive Entertainment shut down the sites, forums, and level-sharing servers for all of the Ricochet and Big Kahuna titles.

In a Big Fish Games forum post in late 2017, user Toktokk received second-hand confirmation from Reflexive Entertainment that stated “… the Administrators of Ricochet has informed us that Ricochet will no longer be sustainable to run. Therefore, the Ricochet Forum is being dismantled and no more sets can be submitted or tested.”

Thankfully, thousands of level sets created by Reflexive and the community of players have been collected and even patched back into the game via fan site Ricochet Universe. Nevertheless, the game in its original form and functionality is considered delisted.

“Ricochet around the Galaxy in this dynamically brilliant breakout action game! Trek across 216 awesome levels, with thousands more online, earning new ranks in the Galactic Tournament, by yourself or with a friend. Play the re-energized Ring Game, winning new balls and ships with unique specialties to give you the edge! Control your ball with the wildly innovative Recall feature…once you’ve tried it, you can’t go back! Travel to the stars and beyond in your glorious quest to become the Ringmaster Grand Champion!“