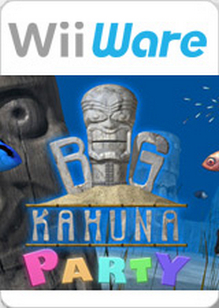 Big Kahuna Party was delisted on Nintendo Wii no later than May of 2017. We recorded an extensive look at the Wii Shop Channel in late May of 2017 and the game had already been removed. Based on other Reflexive delistings it seems likely that Big Kahuna Party would have been delisted some time between 2014 and 2016.

“Embark on a tropical adventure with the explosively charged Big Kahuna Party. Looking to make the ultimate party game, we started with a concept that’s accessible to the whole family-the popular match-three game. On top of that, we crafted a unique multiplayer experience in which you can choose to work together to complete the challenging levels before the timer runs out, or go head-to-head and compete in a frenzy of fun.

To top it off, we added 99 uniquely free-flowing levels, the challenging Tiki Pole, 20 hidden tropical sea creatures to unlock, the strategic Fish Net and more. The result is a family party game like no other, easy to pick up but impossible to put down. Play alone or with friends, and unleash the Tiki spirit within.“