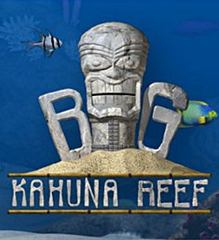 Big Kahuna Reef was delisted from Reflexive’s own PC storefront in June of 2010, from Amazon’s digital game store in May of 2014, and from Steam on November 26th, 2014.

“Go Hawaiian in this gorgeous underwater adventure! Discover Sea Turtles and other aquatic life as you break open boxes in this classic style matching game, questing for the Mask of the Tiki. Using the revolutionary Mouse Party, you can play with multiple players on the same computer through an almost infinite number of levels, thanks to the included level editor. As you play, you will uncover greater challenges including the Skeleton Fish of Kamehameha. Lead on Kahuna…your quest awaits!“