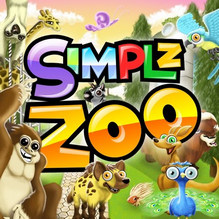 Simplz: Zoo was delisted from Reflexive’s own PC storefront in June of 2010 and from Steam on November 24th, 2014.

In Simplz: Zoo, you’ll be in charge of your own zoo.  You’ll decide everything from what animals to add, to where the water fountains should go.

Play is broken into two parts.  In the simulation part, you’ll build your zoo.  In the puzzle part, you’ll match tokens to gather resources such as money and building materials so that you can further expand your zoo.

Each exhibit you add to your zoo will also directly impact the puzzle part of the game as every exhibit comes with a power-up or other item that will change the puzzle game play, keeping things continually fresh and fun!

Filled with more than 90 comical animals, multi-leveled strategic game play, upbeat music, hidden secret codes, and made to make you smile goodness, Simplz: Zoo is roaring good time for everyone!“