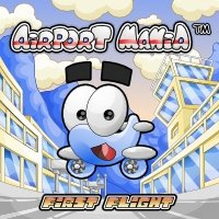 “Pack your bags for a trip through the skies in Airport Mania! Travel through 8 amusing airports while you land a variety of planes, purchase upgrades and avoid delays. Stay on your toes as some planes carry precious cargo and will need to land in a hurry, while others might need a trip to the repair shop. But, with good planning, you’re sure to make it to the gate on time!

With unique challenges, whimsical characters, and fun that will put a smile on your face, Airport Mania is one flight you can’t miss!“