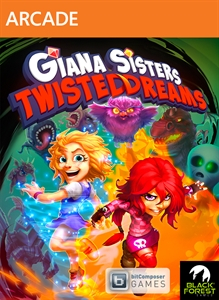 Giana Sisters: Twisted Dreams was relisted on Xbox 360 in January of 2018 according to reporting from TrueAchievements.com. The original delisting information follows.

Giana Sisters: Twisted Dreams was last confirmed available on Xbox 360 on September 20, 2017 and was delisted some time between that date and October 22, 2017. The developer, Black Forest Games, is listed as the publisher on all other versions of the game including the “Director’s Cut” edition that was later released on PC, PlayStation 4, Nintendo Wii U, and Xbox One.

It appears they did not seek to relist or renew the game on Xbox 360. The free Trial Game of the Xbox 360 original remains available as of December 2017.

“Rescue the Giana Sisters in this fast-paced platform game! Jump through tricky levels and transform in an instant from cute to rebellious and back. The entire environment changes with you in real time, including the soundtrack, which was produced by sound magician Chris Hülsbeck. Use your skills, solve challenging puzzles, and defeat nasty end bosses. Start an unusual adventure in this dreamlike remake, and experience the rebirth of a real cult classic of the 80s!“