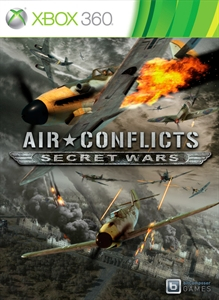 Air Conflicts: Secret Wars was last confirmed available on Xbox 360 on May 4th, 2017 and was delisted some time between that date and December 11th, 2017. In August of 2015 the game’s Steam listing changed publishers from bitComposer to the developer, Games Farm. On consoles it was picked up by Kalypso who also updated the game for release on PlayStation 4. However, Kalypso did not seek to bring the game back as a downloadable title on Xbox 360 and only the physical version remains available on that platform.

“Air Conflicts: Secret Wars – is an arcade flight game with battles spanning both World Wars, featuring seven campaigns and 49 missions that engage players in white-knuckle air battles and secret missions across Europe and North Africa. An impressive selection of famous aircraft of the era is available to the player, each showcasing specific strengths and weaknesses in the battle for air supremacy.