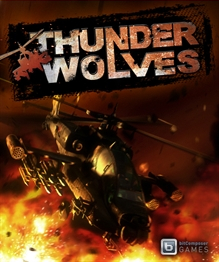 Thunder Wolves was relisted on Xbox 360 in January of 2018 according to reporting from TrueAchievements.com. As of this writing, it has not yet returned to sale on PlayStation 3. The original delisting information follows.

Thunder Wolves was last confirmed available on Xbox 360 on July 25, 2017 and was delisted some time between that date and November 20, 2017. The PlayStation 3 version of the game was likely delisted within this same timeframe. In August of 2015 the game’s Steam listing changed publishers from bitComposer to Nordic Games and eventually to THQ Nordic. The game remains available on Steam but has not reappeared on consoles as of December 2017.

“The world is in danger! Diabolical terrorists are planning total destruction and absolute chaos. However, their plans fail to account for the Thunder Wolves, elite helicopter pilots who fight evil and defend law and order. Join the Thunder Wolves now—put yourself in the pilot’s seat, and get your helicopter airborne! Are you ready for explosive non-stop action? Then let’s go!

KEY FEATURES OF THE FULL VERSION