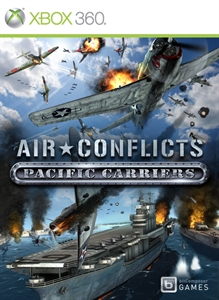 Air Conflicts: Pacific Carriers was last confirmed available on Xbox 360 on November 18th, 2015 and was likely delisted some time around the end of 2015. In August of 2015 the game’s Steam listing changed publishers from bitComposer to the developer, Games Farm. On consoles it was picked up by Kalypso who also updated the game for release on PlayStation 4. However, Kalypso did not seek to bring the game back as a downloadable title on Xbox 360 and only the physical version remains available on that platform.

“Experience top combat action in this brand new arcade flight sim and become immersed in the exploits of famous aircraft carriers. Choose the side you want to play on: the US Navy or the Imperial Japanese Navy. Climb into the cockpit and re-live the most famous battles of the War in the Pacific. Equip your aircraft with realistic weapons, and take to the air with your squadron.“