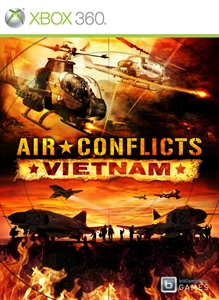 Air Conflicts: Vietnam was last confirmed available on Xbox 360 on October 19th, 2013 and was delisted some time between that date and October 10th, 2014. In August of 2015 the game’s Steam listing changed publishers from bitComposer to the developer, Games Farm. On consoles it was picked up by Kalypso who also updated the game for release on PlayStation 4. However, Kalypso did not seek to bring the game back as a downloadable title on Xbox 360 and only the physical version remains available on that platform.

“Take a seat in the cockpit of fighter planes and helicopters and plunge right into daredevil aerial battles above the jungles of Vietnam! Prepare for a mind-blowing flight simulation with exotic landscapes, detailed airplane models and challenging missions that will put your piloting skills to the ultimate test. You are Joe Thompson, an intrepid pilot fighting to uphold the values of his country, and who has just realized that there are two sides to every war.“