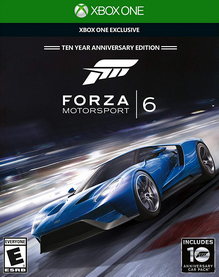 Turn 10’s Brian Ekberg announced in a ForzaMotorsport.net blog post on August 2nd, 2019 that Forza Motorsport 6 would be removed from sale on September 15th. The announcement detailed that the game was being added to the Games With Gold program starting August 15th and that a majority of its DLC (including an all-inclusive $100 bundle) would be on sale for roughly two weeks. The announcement read:

Earlier this week, Xbox announced its August lineup of Xbox Games With Gold titles which, starting on August 15, will include Forza Motorsport 6. If you are an Xbox Live Gold member, you’ll be able to pick up this modern classic Forza game at no additional cost. In addition, there are some amazing deals on FM6 add-on content during this time period, including a bundle of all FM6 add-on content available for a mere $5. That sale starts on August 15 and will only be available for a short period of time so, if you haven’t already played Forza 6, don’t miss this chance time to revisit this classic slice of Forza history.

As with other delisted Forza titles, Forza Motorsport 6 was most likely delisted due to the expired licensing of music and vehicles featured in the game. As of this writing it is uncertain when the free-to-play PC iteration, Forza Motorsport 6: Apex, will be delisted.

“Forza Motorsport 6 is the most beautiful and comprehensive racing game of this generation. Collect and race over 450 Forzavista cars, all with working cockpits and full damage. Master wet weather and night racing on your road to victory. Compete in epic 24-player races and Forza Race Leagues across 26 world-famous locales, all at a stunning 1080p resolution and 60 frames per second.

Thanks to Oldmaru for submitting this game to the site