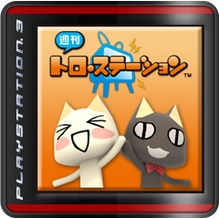 Weekly Toro Station (週刊トロ・ステーション) for PlayStation 3 and PlayStation Portable was completely shut down on September 30th, 2013. Prior to this, on March 28th, some services were terminated but players were still able to log in, play minigames, and run out the duration of their paid “Platinya” memberships.

In the farewell announcement, the team only thanked players for their understanding in the decision to shut down the service. While no explanation was given, it is assumed that like Mainichi Issho, the cost to maintain the service and support the development team became unprofitable.

Weekly Toro Station served as a replacement/sequel to Mainichi Issho. According to Wikipedia it offered a “lighter, weekly service that focuses more on video games and manga/anime culture news”.