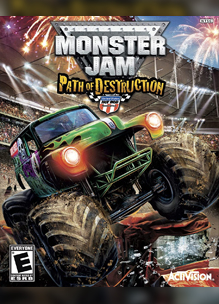 Monster Jam (2007) and Monster Jam: Path of Destruction were likely delisted in or close to November of 2014. Activision’s license to the Monster Jam property (now owned by Feld Entertainment, formerly Live Nation Motor Sports Inc) apparently expired in 2014. The games were delisted ahead of the 2015 releases from the new licensee, Gamemill Entertainment.

Bigger, Bolder and Badder!  Get ready to challenge 28 of the top monster trucks and battle in real Monster Jam events including stadium racing and freestyle competitions.  Enjoy bonus modes such as circuit race, time crunch, gate rush, and team race.  Win events and do big tricks to level up and unlock new trucks, parts, and stadium venues.  Create the ultimate monster truck on the path to the world finals in Las Vegas!