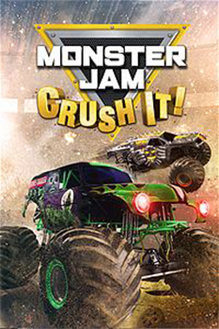 The game was presumably delisted due to expired licensing from Feld Motor Sports, Inc. who owns the Monster Jam name as well as several monster trucks including Grave Digger. It appears the license has moved to THQ and Rainbow Studios who are releasing Monster Jam Steel Titans in 2019.

“Crush It! takes fans back into authentic real-life stadiums for racing and freestyle events including the site of Monster Jam World Finals – Sam Boyd Stadium. Choose your favorite official Monster Jam trucks such as Grave Digger®, Max-D™, Monster Mutt and many more. Take your favorite Monster Truck out of the stadium and into all new environment challenges.

Exciting physic based challenges include skills, hill jump and stunt modes. All-new tracks that will test your skills to master speed and balance over insane jumps and obstacles or face ultimate destruction. Compete as a single player, versus or log into online leaderboards to earn bragging rights as the best Monster Jam truck driver and much, much more…“