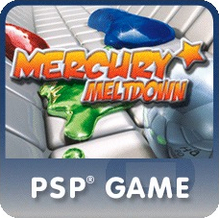 The Mercury titles published by Ignition Games (Archer Maclean’s Mercury [PSP, Vita], Mercury Meltdown [PSP, Vita], and Mercury Hg [PS3]) were delisted from the PlayStation Store in Europe no later than October 9th, 2018. This is the date we received a submission pointing out the absence of Mercury Hg and began investigating.

As of this writing no explanation has been given by Ignition for the territory-specific delisting. The games remain available to download in North America and on physical media in the territories in which they were released. Swarm, also published by Ignition Games, has been delisted worldwide while other titles from the publisher remain available.

“Once again taking control of the liquid Mercury ‘blob,’ players must avoid various obstacles and hazards to reach the end goal. The Mercury blob itself has now been given an overhaul and has 4 varying states: Normal, Solid, Fast and Slow. These states allow for larger more complex levels, which in turn mean a greater challenge and more enjoyment to be had for the player.

The number of levels has more than doubled now 160+, and with the newly added feature of Downloadable Content more levels will be made available at a later date. Wireless 2 Player modes have also been an important addition, with 5 sub games each providing a challenge against the computer or a friend.“