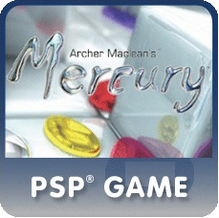 The Mercury titles published by Ignition Games (Archer Maclean’s Mercury [PSP, Vita], Mercury Meltdown [PSP, Vita], and Mercury Hg [PS3]) were delisted from the PlayStation Store in Europe no later than October 9th, 2018. This is the date we received a submission pointing out the absence of Mercury Hg and began investigating.

As of this writing no explanation has been given by Ignition for the territory-specific delisting. The games remain available to download in North America and on physical media in the territories in which they were released. Swarm, also published by Ignition Games, has been delisted worldwide while other titles from the publisher remain available.

“This game has been specifically designed to take full advantage of the unique gaming experience offered by the PSP® Handheld Entertainment System. It is the most imaginative and compelling puzzle game to be released in recent years! The aim of the game is simple: Guide your Mercury around each 3D Maze by “tilting” the level and navigating through the countless challenges encountered along the way.“