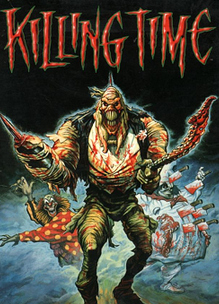 GOG.com team member Chandra posted to the game’s forum page on January 29th that Killing Time would be removed from sale later that same day. It was later delisted from Steam on February 6th, 2020.

For a time, the game was available exclusively on ZOOM where it is published by Retroism/Prism/ZOOM. As of late April 2020, the game was free to download from ZOOM.

“Killing Time is a horror themed first-person shooter set in an open world. In Killing Time, the player assumes the role of a student of Egyptology searching for an ancient water clock from the dynasty of the Pharaoh Ramses. The player journeys to the island of Matinicus, the location of the Conway estate, which has been closed to visitors for more than 60 years. The island was sealed off from the public when young heiress, Tess Conway, along with her high society friends, disappeared during the night of the Summer Solstice in 1932. Tess was obsessed with the occult. Shortly before her disappearance, she acquired the water clock, which was rumored to grant everlasting life. As the player, can you find the secret of everlasting youth and still escape alive?

As the player, you must use your wits and your weapons to make your way to the heart of this compelling mystery. Creep through dark hallways into the dim rooms of the past, speak to the video-real shades of former residents, and kill or be killed until you solve the mystery of Matinicus Isle.“