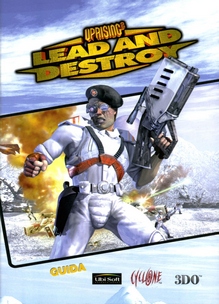 “After a century of bloody galactic battle, a horde of intelligent bloodthirsty aliens, known as the Kri’iSara, threaten to exterminate all human life. New Alliance Command is counting on you to destroy the alien menace. Lead your combined forces from a second-generation Wraith battle tank. Fight your way through 28 brutal missions featuring maxed-out weapons and power units at your disposal.“