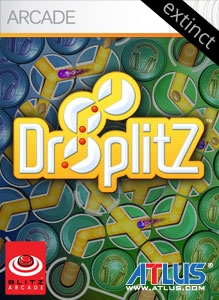 Droplitz was last available on Steam on February 24th, 2014 following Blitz Games Studio’s closure on September 12th of the previous year. Droplitz was created internally at Blitz Arcade but was not published by the studio’s parent organization, Blitz Games Studio. Droplitz Delight, an iterative follow up to the original, was released to mobile platforms (iOS, Android) after 2010 and is still available as of October 2017.

“Immerse yourself in this addictive puzzler that’s all about strategically twisting and connecting mismatched dials to save precious droplitz. Just making a single junction is child’s play; can you master the art of the combo or will you let your pipes runneth over? Be warned: losing too many droplitz can be hazardous to your ability to win. With four unique play modes, a variety of board sizes, and infinite replayability, Droplitz promises to drain all your time away.”