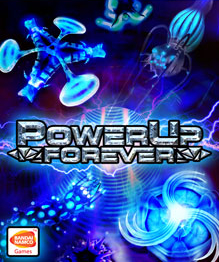 “Fly around a highly stylised world, avoid enemies and kill guardians. The higher your level, the bigger your ship. And the bigger your ship, the larger your enemies. Environments and enemies are generated as you go, so you’ll never play the same game twice. And, if you’re good enough, you could go on playing forever, with infinite levels.

An original concept by a member of staff at Blitz Arcade, PowerUp Forever is addictive, beautifully simple and guaranteed to get under your skin. It’s also stunning to look at, with a swirling light show of colour sucking you further into the PowerUp Forever world.

Starting off simply with some basic enemies firing at you, the longer you go on the harsher they fire at you. When you finish off a Guardian, you complete the level and move on through the evolutionary gameplay, where your craft grows, your weapons improve and your enemies change.”