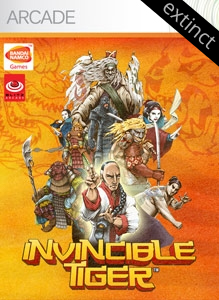 Invincible Tiger: The Legend of Han Tao was last available on Xbox 360 on February 12th, 2014 following Blitz Games Studio’s closure on September 12th of the previous year. It is presumed to have been delisted on February 24th alongside other Blitz releases. Invincible Tiger was created internally at Blitz Arcade but was not published by the studio’s parent organization, Blitz Games Studio.

“Invincible Tiger: The Legend of Han Tao offers a variety of multiplayer modes for both online and local play. Team up with a partner and take on the Evil Overlord’s diabolical army through Story Mode Co-op or battle an endless stream of enemies under a specific time limit with Endurance Mode.

Han Tao will face a cavalcade of enemies, ranging from henchmen to undead horrors, in his quest to recover the sacred Star of Destiny. Luckily, Han Tao is well-versed in intense combos, slick counter-moves, the art of deadly weapons, and mystical Zen attacks. By filling up Han Tao’s Zen Meter with punishing combos and well-timed dodges, players can unlock the full potential of his power and decimate the opposition. Sliding down ropes, going through doors, climbing up poles or jumping on roofs, Han Tao is also able to use his environment to quickly escape danger or catch enemies off guard.”