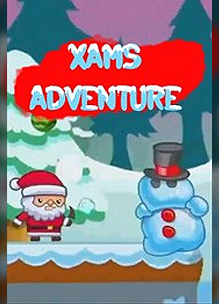 Xmas Adventure For Kids was delisted on Xbox One between July and November of 2021. The majority of the posted reviews for the game on its Xbox.com page end in July of 2021. Its absence was then confirmed by us in November of 2021 while researching WEIWEIDINO GAMES’s other release, WeiWei Dino Game For Kids. Unlike that title, which was removed after a DMCA notice was filed against it, Xmas Adventure For Kids appears to have been non-functional with many reviews stating it would not load past the title screen. The footage below shows several graphical and gameplay glitches.

Xmas Adventure For Kids may have been removed for violating Microsoft’s technical certification standards, but it’s also possible that Microsoft removed WEIWEIDINO GAMES as a licensed Xbox developer and publisher causing both titles to be delisted.

Welcome to Xmas Adventure For Kids. In the game, you control Santa to get the exit on each level. You have snowballs to fight off enemies but only so many so be careful.