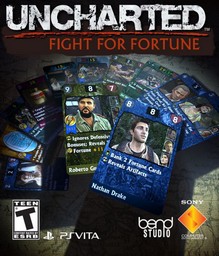 Uncharted: Fight for Fortune was delisted from the PlayStation Vita in North America between June 28th and July 3rd, 2019. It was delisted in Australia and Europe shortly afterward, between July 4th and July 9th, 2019. Neither Sony nor Bend Studio made public mention of the game’s removal and it never appeared on Sony Europe’s Decommissioned Servers page.

Although not developed by Naughty Dog directly, the shutdown may have followed with plans revealed in June of 2019 to retire online play in the studio’s PlayStation 3 titles. It is also likely that the player base for Uncharted: Fight for Fortune was too small to justify continued support and maintenance of its online servers.

“Join fortune hunter Nathan Drake and a cast of heroes, villains and mercenaries from the Uncharted universe and do battle for fortune and glory beyond your wildest dreams.

Uncharted: Fight for Fortune™ puts a unique twist on treasure hunting by letting you build factions, equip them with weapons and abilities, then send them to fight your enemies and loot treasure – all using a deck of special Uncharted playing cards.

Choose the right combination of cards to win bounty and equip your factions with powerful attacking and defensive strategies. Defeat your opponents to expand your card library and be in an even more powerful position for your next battle – and be ready to fight for even more priceless treasures.“

Thanks to Will F for submitting this game to the site