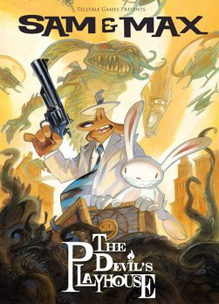 Sam & Max: The Devil’s Playhouse (aka Sam & Max: Season Three) was delisted from GOG.com on May 27th, 2019. GOG.com Team member Chandra announced in a forum post on May 23rd, 2019 that all titles from Telltale Games would be removed from GOG.com on the 27th. The announcement read:

As of this writing the game remains available on Steam and PlayStation 3.

“Wield psychic powers against fearsome foes in epic comedy saga over 5 monthly episodes. An otherworldy power for controlling matter and space calls to the strongest and strangest who might wield it — intergalactic warlords and eldritch gods, under-dwellers and scholars of the arcane.

Gaming’s greatest dog and rabbit sleuths Sam & Max seek the power’s ancient secrets, as manic Max gains shape shifting, teleportation, mind reading and future vision abilities for battling these foes. The saga plays out in a surreal 5 month-long symphony of mayhem that gets deeper and more twisted with each episode.“