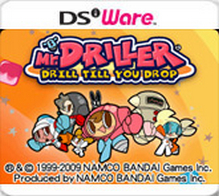 Mr. Driller: Drill Till You Drop was delisted no later than March 27th, 2019. This is the earliest date that a Google Cache archive is available and shows the title was already delisted. By March 29th, 2019 at least three other Namco titles were removed from the PlayStation Store. All four related titles were submitted to the site by an anonymous source within a day of each other.

The reason for the delistings is uncertain. On Nintendo’s platforms Mr. Driller: Drill Till You Drop was Namco’s only DSiWare release outside of Japan so a precedent is hard to identify. On the PlayStation Store, several “PSOne Classics” are alternately published by Namco themselves and Sony Interactive Entertainment. Other “PSOne Classics” from Namco remain available as published by Sony.

“Drill till you drop with the latest version of Mr. DRILLER exclusively for the Nintendo DSi system! Featuring the classic gameplay that the series is known for, Drill Till You Drop has three different game modes and over 40 stages of non-stop drilling action! Go underground with Mission mode and dig in various locales with deeper and more challenging goals, race against the clock to reach the goal in Time Attack mode, or drill through a labyrinth of stones to collect the rare and precious Dristones in the Dristone mode, which is exclusive to the Nintendo DSi version. Choose one of the six different drillers, drill through a seemingly endless onslaught of colored blocks, avoid falling obstacles, and strategically manage your oxygen on the go!“