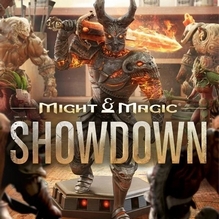 On July 11th, 2017 the team announced that Might & Magic Showdown would be shut down on July 31st. The game was removed from sale on the same day as the announcement which read:

We regret to announce that Might & Magic SHOWDOWN will be shutting down on July 31, 2017, ending our Early Access period and ceasing server support. As a result, the game will be inaccessible after this date.

We wish to convey our sincerest gratitude to you, our dedicated players, who have helped us navigate the management of an Early Access campaign – because of you, we have learned a great deal about how best to serve you and we hope to carry these learnings forward into future Ubisoft projects.

We also owe a very special debt of gratitude to our Might & Magic fans who accepted this new take on the universe. It has been our pleasure and honor to deal with one of gaming’s longest lived communities.

Effective immediately, Might & Magic SHOWDOWN will be removed from the Steam Store to prevent further purchase of the Early Access license. The game will remain in your Steam Library, but server support will end on July 31, 2017 and the game itself will become inoperable. In an effort to ensure that we abide by our players’ expectations of the Early Access model, we will be offering full refunds to players who feel they are owed them until July 31, 2017.

PAINT WORKSHOP
Customize and bring your miniatures to life with the powerful Might & Magic® SHOWDOWN character painting tool. Quickly create detailed masterpieces with base coats and surface details or use the free-form precision of the digital brush.

ABOUT THIS GAME
Set in the rich RPG fantasy universe of Might & Magic with its diverse bestiary, Might & Magic® SHOWDOWN is a tactical PvP combat experience where you command a team of customizable miniature heroes and creatures to overcome your opponent by mixing strategic planning and real-time action in quick, bite-sized sessions. Build your team and bring the miniatures to life through a combination of visual personalization and programmable actions that will define your playstyle and ultimately bring them to the battleground for the Showdown!