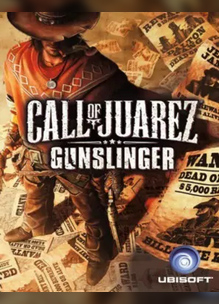 Gunslinger briefly returned to sale on Xbox 360 no later than April 10th, 2018 across all territories but was delisted again in May. It returned to sale on Steam on April 28th, 2018 where it is now published by Techland themselves. As of June 2018, it was only available on PlayStation 3 in Europe as part of a bundle which has since been removed from the PlayStation Store. The game’s brief return on Xbox 360 was most likely a technical hiccup due to the change in ownership of the Call of Juarez property from Ubisoft to Techland.

The game returned to sale on Xbox 360 again in September of 2018 according to TrueAchievements.com but was once again delisted in January of 2021. While it is no longer available to purchase on Xbox 360, the 2015 Xbox One Backward Compatibility release remains available on Xbox One and Xbox Series X|S as of February 2022. The PC version available from the Ubisoft Store had also been delisted no later than July of 2021.

Licensing issues around music or other media featured in the game may have led to some of the delistings, although the change in ownership of the property from Ubisoft to developer/publisher Techland seems to be the most likely cause. The 2021 Xbox 360 delisting may have been related to Techland’s standing as a publisher on the older platform. Gunslinger was the only title we found that was credited to Techland as a publisher on Xbox 360.

From the dust of a gold mine to the dirt of a saloon, Call of Juarez: Gunslinger is a real homage to the Wild West tales. Live the epic and violent journey of a ruthless bounty hunter onto the trail of the West’s most notorious outlaws. Blurring the lines between man and myth, this adventure made of memorable encounters unveils the untold truth behind some of the greatest legends of the Old West.