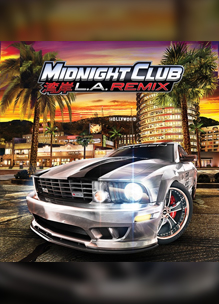 Midnight Club L.A. Remix for the PSP system features all of the licensed cars, the deep customization, and the breakneck racing action from the console versions of Midnight Club Los Angeles, as well as these special unique gameplay elements and modes you will only find in this handheld release.

Arcade & Career Modes
Midnight Club L.A. Remix has two distinct single player gameplay modes for different types of gamers. In addition to a robust open-ended Career mode patterned after the one in Midnight Club Los Angeles, players can also jump into Arcade mode for quick-play races and modes, including the L.A. Remix-exclusive Frenzy – a points-based mode that requires quick reflexes and unmatched nerve to avoid a barrage of oncoming traffic, while racing against the clock through a series of checkpoints.

Tokyo
On top of racing through a vastly detailed Los Angeles that includes real landmarks and streets, variable weather patterns and three different times of day, the Midnight Club ventures across the Pacific to the crowded streets of Tokyo for unique races and career challenges exclusive to Midnight Club L.A. Remix.

At the beginning of the race, a single checkpoint is revealed. The last driver to reach this checkpoint is made “It” and a zone is created around their car. Now all the other drivers can score points by staying inside this zone. The closer you get to the tagged racer, the more points you will score, but if you touch the tagged racer, you’ll become the next target. Tag races are only available in Tokyo.