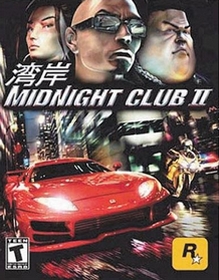 Midnight Club II was delisted from Steam on February 12, 2018 when its price was set to $0.00. It was presumably delisted from PlayStation 3 around this same time. While the game’s Steam page calls out its incompatibility with Windows 7 and Vista — alongside demands for performance patches by the community — the game was most likely delisted due to expired licensing over its expansive soundtrack.

An updated version with an edited soundtrack, along the lines of Grand Theft Auto IV and Mafia, was expected over the ensuing months but as of this writing the game has not returned to sale. It remains available on physical media.

“Members of the world’s most notorious illegal street racing syndicate meet each night on the streets of Los Angeles, Paris, and Tokyo. Find yourself in the position of a novice challenger, set on penetrating this secret society and trumping them all, one by one. Add insult to injury, as you win the suped-up rides of defeated adversaries, all on your way to being crowned international champion. Just remember, there are no rules. Use whatever routes, shortcuts and driving methods necessary to hit those checkpoints and arrive at the finish line before your opponent has a chance. The cops know you are out there – don’t get caught.“